A Boulle Fireplace or Trumeau

Here is what I found in my research:

This is not a fireplace, as it would not be practical to have an open fire in combination with the body of fine rosewood. It is a piece of furniture that originally developed from the 18th century as a piece that was placed in between two tall windows in a room in order to reinforce the light in the interior and of course, give proof of the wealth of the owners of the house. This piece would be called a "Trumeau". It was brought to the homes of the wealthy during the regency of Napoleon. At first, it consisted mainly of a rectangular tall mirror and beautifully ornamented frame with mostly ormolu decoration.

Later, it became a piece of furniture in its own right. It was equipped with an equally fine decorated wooden stand; the sides of which were sometimes molded and sculpted, as this piece is with lions, a symbol of power. This was during the Empire period, from 1800-1820. As a piece of furniture it was against one of the walls, in a place where it could be seen distinctly, whenever a visitor entered the room. Trumeaus were part of the interiors of important and representative rooms until the first quarter of the 20th century. (Note: Margaret Hupkes from the Netherlands provided this information for me). A close up does show a grate inside with wood surrounding it. Exceptional carved lions are carved and mounted on the corners below the marble. 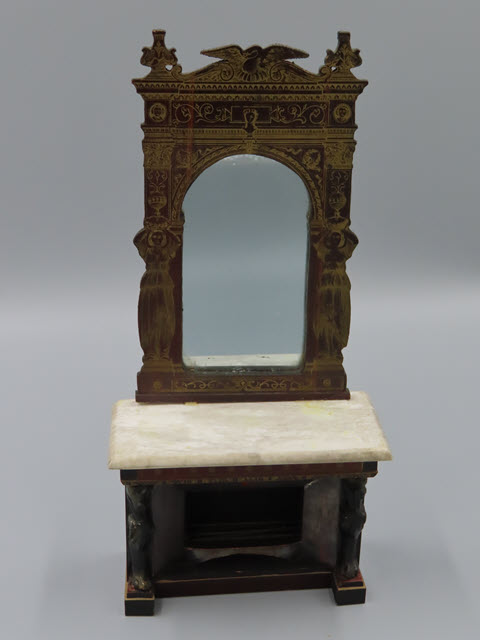